Standing for a Few Minutes during Working Helps Reduce Back Pain 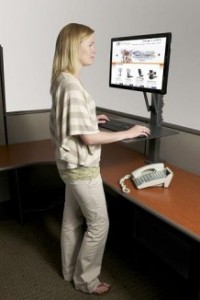 A new study suggests that 30-minutes stints of standing during work may help reduce back pains.

Prolonged sitting has been linked with a variety of health problems. Past research has found office workers spend about 75 per cent of their work day sitting in a chair.

In the study, 17 men and six women were randomly assigned into two groups, one group sat while working over the course of an eight-hour day and the other alternated every 30 minutes between sitting and standing.

The workers did this for five days. The participants were all middle-aged.

On the fifth day, the workers reported that they had reduced fatigue, better focus and concentration.

The study thus says that standing can be beneficial to reduce back pains in workers who are sitting for too long.