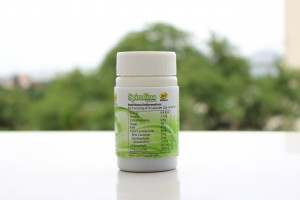 Spirulina – A Great Source of Protein

Spirulina is most often promoted as a significant source of protein. It is claimed that the dried spirulina contains about 60 -75 % protein and amino acids including the essential fatty acid gamma linolenic acid (GLA) which has gotten a lot of attention for its anti-inflammatory properties. It contains all essential amino acids. Spirulina contains proteins that are biologically complete, which means they provide all eight essential amino acids in the proper ratios. Furthermore, spirulina provides all the required amino acids in a form that is easier to digest than meat or soy protein.

Diabetes is really a cluster of related pathologies, including insulin resistance, obesity, dyslipidemia, and hypertension. Spirulina has been shown to benefit diabetics in the following ways:

>>Reducing systemic inflammation. (Insulin resistance has come to be associated with a state of systemic low-grade inflammation.)

>>Improving vasodilation in those who are obese as a result of high fructose diets (which has benefits for diabetics, as well as for those with hypertension and cardiovascular disease). Source

In 2005, a study by researchers from Department of Biotechnology, Bundelkhand University, India, found out that Spirulina performs regulatory role on lipid and carbohydrate metabolism by exhibiting glucose and lipid profile correcting activity in experimental animals and in diabetic patients. Source

Studies by Azabji-Kenfack Marcel et al., Department of Physiological Sciences and Biochemistry, Cameroon, have shown that 19g /day of Spirulina platensis given to 17 insulin-resistant HIV infected patients for 2 months improved the insulin sensitivity in those patients.  (More)

Studies by JALAJA KUMARI et al., Department of Foods and Nutritional Sciences, Andhra Pradesh, has found that oral administration of spirulina extract (90 mg/kg bw) for 6 weeks to diabetic rats protected the rats from the alterations induced in carbohydrate and lipid metabolism. (More)

Diabetes and cardiovascular health are intimately connected, so it’s no surprise that spirulina shows great potential for people with cardiovascular disease, in terms of creating better lipid profiles, controlling hypertension, and increasing blood vessel elasticity. Diabetic patients given 2 grams per day of spirulina showed improved glycosylated hemoglobin and better lipid profiles in a 2001 study. And in this study of the Mexican population, 4.5 grams per day of spirulina significantly reduced serum triglyceride levels and total cholesterol, boosted HDL, and reduced blood pressure in test subjects.

It is thought that the lipid action of spirulina may be due to its phycocyanin content, which inhibits pancreatic lipase activity, and this in turn causes higher excretion of triglycerides through your feces.

In 2001, Bangladeshi researchers conducted a three-month hospital-based study in which 33 patients were given spirulina and 17 were given placebo doses. 82% of those taking Spirulina showed tremendous improvement.

Published in the Mymensingh Medical Journal (2010, Jan), a study conducted by researchers at the Department of Pharmacology at the Mymensingh Medical College, Bangladesh has discovered that spirulina extracts can effectively remove arsenic from the livers of mice suffering from arsenic poisoning (arsenicosis).

An in vitro study in 2008 concluded that spirulina may possess iron chelating properties. Human neuroblastoma cells were treated with a toxic amount of iron, and then treated with spirulina. When treated, the iron-induced oxidative stress was reduced – Source

In a study by Takefumi Sagara et al., Department of Food and Nutrition, Japan, an aqueous extract containing non-protein components of Spirulina platensis was prepared and its effects on effect on the iron-evoked damage to PC12 cells was examined in an in vitro model experiment. The protein-deprived extract caused a protective effect against the iron-evoked damage to PC12 cells as a consequence of preventing the free radical-evoked DNA degradation. Further studies showed that the extract has antioxidant and free radical scavenging activity. (More)

Studies by YANG Zhan-jun, Huaiyin Normal College, China, have found that spirulina supplementation to lead poisoned mice, increased the learning,memory and anti-fatigue ability of mice while the contents of MDA decreased. This shows that spirulina can antagonize the neurotoxicity caused by lead. (More)

A study conducted by University of California at Davis, School of Medicine, Davis, California, researchers discovered that Spirulina is effective for allergic rhinitis. In this 2005 study, Spirulina administered at 2,000 mg/day, significantly reduced IL-4 levels by 32% from PHA-stimulated cells. These results indicate that Spirulina can modulate the Th profile in patients with allergic rhinitis by suppressing the differentiation of Th2 cells mediated, in part, by inhibiting the production of IL-4. To our knowledge, this is the first human feeding study that demonstrates the protective effects of Spirulina towards allergic rhinitis. Source

Studies by T.K. Mao et al., Division of Rheumatology/Allergy and Clinical Immunology, California, has found that 2 g supplementation of spirulina for 12 weeks in allergic individuals, significantly reduced IL-4 levels by 32% from PHA-stimulated cells which show that spirulina can modulate the Th profile in patients with allergic rhinitis by suppressing the differentiation of Th2 cells mediated, in part, by inhibiting the production of IL-4. (More)

In 2005, a study by researchers from Department of Biotechnology, Bundelkhand University, India, found out that Spirulina possesses diverse biological activities and nutritional significance due to high concentration of natural nutrients, having bio-modulatory and immuno-modulatory functions. According to the research, different Spirulina preparations influence immune system viz. increase phagocytic activity of macrophages, stimulating the production of antibodies and cytokines, increase accumulation of NK cells into tissue and activation and mobilization of T and B cells. Spirulina has been found to be active against several enveloped viruses including herpes virus, cytomegalovirus, influenza virus and HIV. They are capable to inhibit carcinogenesis due to anti-oxidant properties that protect tissues and also reduce toxicity of liver, kidney and testes. Source

As the population ages, the prevalence of age-related macular degeneration (ARMD) is on the rise. ARMD is the deterioration of your macula (the region in your eye that controls acute vision), which typically occurs later in life. ARMD is the leading cause of blindness today.

Your eyes’ macular membranes contain several carotenoid pigments called xanthophylls—lutein, zeaxanthin, and possibly astaxanthin, if you’re getting it as part of your diet. These special pigments help protect your eyes from damage by slowing down ultraviolet-induced oxidation of lipid membranes, thereby helping prevent degeneration of your macula.

Additionally, xanthophylls may be effective in preventing cataracts. Spirulina provides 3,750 to 6,000 mcg zeaxanthin per serving size (3 grams). Eggs are another excellent source of both lutein and zeaxanthin (200 mcg zeaxanthin per yolk). Astaxanthin is also another marine-based nutrient that is in the carotenoid family and is also a potent preventor of ARMD. Source

The accumulation of fats in your liver is closely associated with metabolic syndrome and strongly raises your risk for dying from cardiovascular disease. Non-alcoholic fatty liver disease (NAFLD) is the most common cause of chronic liver disease in North America and notoriously difficult to treat, at least with traditional medical measures.

Animal studies suggest spirulina can protect your liver, probably as a result of its high antioxidant properties and its ability to synthesize or release nitric oxide. Source

Studies show that spirulina does the following for your liver:

>>Prevents the buildup of triglycerides in your liver

>>Protects your liver from damage by heavy metals, like lead and mercury

Diets high in antioxidants have been shown to lower the risk for stroke. Two studies (one in the Journal of Agricultural and Food Chemistry, the other in the British Journal of Nutrition) showed that Spirulina reduces platelet aggregation, which plays an important role in vascular diseases by reducing your risk for thromboembolism.

And, in an Oregon State University study of rats that had induced strokes, the group fed spirulina showed brains lesions that were 75 percent smaller than those in control groups. Source

A study was conducted by Kyoji Morita et al., Laboratory of Neuropharmacology, Japan, where a protein-deprived extract was prepared  from aqueous extract of Spirulina platensis, and the effect of this extract on brain-derived neurotrophic factor (BDNF) gene transcription was examined in C6 glioma cells.

The results showed that the non-protein component of Spirulina platensis stimulated BDNF gene transcription through the heme-oxygenase (HO-1) induction in glial cells stating that the algae can indirectly modulate the brain function through the glial cell activity. (More)

In another study by Mibel M. Pabon et al., Department of Molecular Pharmacology and Physiology, an adeno-associated virus vector (AAV9) for α-synuclein was injected in the substantia nigra of rats to model Parkinson’s disease. The rats were fed with a diet enhanced in spirulina. The results showed that spirulina decreased the numbers of activated microglial cells as determined by MHC II expression. (More)

Spirulina for Anaemia and Immune Function

Anemia and immunological dysfunction (i.e. immunosenescence) are commonly found in older subjects and nutritional approaches are sought to counteract these phenomena. In a study by Carlo Selmi et al., Division of Rheumatology, Allergy and Clinical Immunology, USA,  participants who took a Spirulina supplementation for 12 weeks showed a steady increase in average values of mean corpuscular hemoglobin. Older women appeared to benefit more rapidly from Spirulina supplements.

Similarly, the majority of subjects manifested increased IDO activity and white blood cell count at 6 and 12 weeks of Spirulina supplementation. Spirulina may ameliorate anemia and immunosenescence in older subjects. (More)

Studies by Patricia Victoria et al., Department of Biochemistry, Mexico, have shown that oral supplementation of 5g spirulina maxima for 15 days to 41 runners, decreased the fasting plasma triacylglycerol (TAG) concentrations and also the postprandial area under the curve of TAG concentrations. (More)

In a study by Jennifer Jernberg et al., Department of Neurosurgery and Brain Repair, United States of America, young rats were fed for 30 days with a diet supplemented with 0.1% spirulina. On day 28 the rats were given a single i.p. injection of LPS (1 mg/kg). The results showed that the diet supplemented with spirulina was able to negate the LPS induced decrease in stem/progenitor cell proliferation. (More)