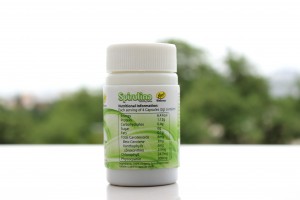 A team of entrepreneurs at start-up company EnerGaia has succeeded in producing commercial quantities of spirulina, an eco-friendly superfood, using the sun-baked dead space on the top of Bangkok high-rises for a farm.

Founded and run by entrepreneur and engineer Saumil Shah, EnerGaia uses an innovative system of interconnected plastic bins, each holding 250 to 280 litres of liquid, with a pumping system to agitate the Spirulina mix and ensure the photosynthetic algae receive sufficient sunlight and nutrients.

When the liquid reaches a certain density, the Spirulina is harvested, washed and extracted using a low-speed centrifugation system.

The resulting paste has a consistent texture with a water content of about 70% and lasts for a month in refrigerator. According to the company’s founder, the Spirulina paste is ideal for mixing into smoothies for an added health boost, using in cooking to boost the protein content of various dishes or just eaten straight from the jar.

The company is also keen to form partnerships with organizations such as breweries, mills, or other industrial users to utilise carbon dioxide from their production processes as an input to cultivate spirulina, thus lowering emissions of greenhouse gases in a productive and economical way.

The company also aims to expand its output by establishing more production facilities on rooftops in Bangkok and elsewhere on non-arable land.