Algae, ranging from single-celled microalgae to large seaweeds, are the simplest and most abundant form of plant life, responsible for more than half of the world’s primary production of oxygen. They form the base of the food chain with many living things depending upon them.

Algae have been collected for more than 4000 years in China and Japan for use as human food. There are many algae that are still cultivated for their nutritional value, either for supplemental use, or as a food source. 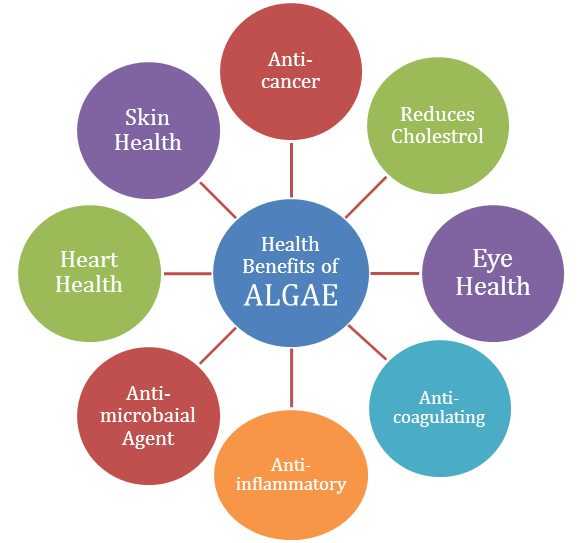 Algae are rich sources of:

Algae are natural superfoods with greatest sources of extraordinary nutrients.

As algae are very high in nutrients, they are emerging as one of the most promising health supplements with potential health benefits. Studies evaluating the effects of algae suggest that some algae are beneficial for:

Protein – Some algae such as Spirulina contain unusually high amounts of protein, between 55 and 70 percent by dry weight, depending upon the source (Phang et al., 2000). It is a complete protein, containing all essential amino acids, though with reduced amounts of methionine, cystine, and lysine, as compared to standard proteins such as that from meat, eggs, or milk; it is, however, superior to all standard plant protein, such as that from legumes.

Beta carotene – Beta-carotene is a precursor of vitamin A, which is essential for healthy skin, mucus membrane, immune system, and eye health. It is also an anti-oxidant, which prevents cell damage caused by free radicals.

Astaxanthin – Astaxanthin is a carotenoid pigment and mainly used as an antioxidant. It is believed to be effective in decreasing the risks of cancer, and beneficial in cardiovascular, immune, inflammatory and neurodegenerative diseases. Studies state that it can also be used to treat carpal tunnel syndrome, rheumatoid arthritis, high cholesterol, musculoskeletal injuries, muscle strength and endurance, and male infertility.

Canthaxanthin is a carotenoid used to protect skin against sun sensitivity and for relieving itching caused by sun exposure. It is used in cosmetics and in medications.

Phytoene, phytofluene – These are carotenoid pigments and believed to be beneficial in skin care by acting as antioxidants, UV absorbers and anti-inflammatory agents.

Echinenone, Fucoxanthin, and Phycobilins (Phycocyanin, Phycoerythrin, allophycocyanin) – These are carotenoid pigments that act as anti-oxidants, and believed to have anti-inflammatory, antinociceptive, and anti-cancer effects.

The table below provides a summary of potential nutraceutical products from microalgae, alternative sources and applications. 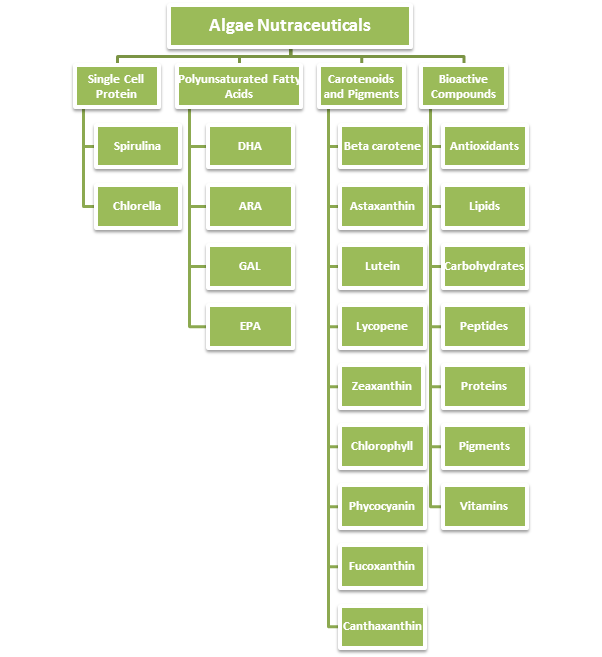 Following are the most commonly used commercial algae-based health supplements:

1 kg of Spirulina has the same nutrients found in about 1,000 kgs of assorted vegetables

Recommended Dosage 2 to 3 grams ( in four to six portions of 500 milligrams each)
Max limit: Up to 10 grams per day Side-effects

Spirulina is completely safe. In few cases, people have reported some side effects such as:

Know more about the benefits of Spirulina

The only food supplement with high chlorophyll to detoxify your body

Recommended Dosage 1.5 to 3 g /day ( Maximum limit – up to 9g ) Side-effects The most common side effects include diarrhoea, nausea, gas (flatulence), green discolouration of the stools, and stomach cramping. Who Should Avoid? Chlorella can contain iodine. Therefore, chlorella might cause an allergic reaction in people sensitive to iodine.

Know more about the benefits of Chlorella

Recommended Dosage 1-2 g per day Side-effects Gastrointestinal symptoms such as belching, indigestion, or diarrhoea Who Should Avoid? People who take drugs such as anticoagulants or anti-inflammatory drugs should avoid omega-3 supplements

Most powerful anti-oxidant which is,

Astaxanthin is found to have beneficial effects in:

Recommended Dosage 2 mg / day (Max. limit – 8-10 mg/day) Side-effects Side effects, although non-toxic, include: Who Should Avoid?

Beta-carotene is found to be beneficial in: